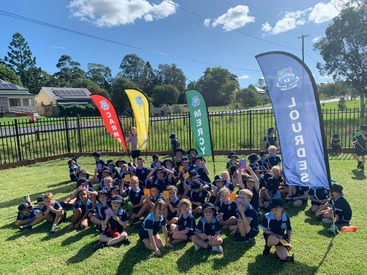 Students belong to four house teams that promote connections to our Catholic story and a deeper sense of belonging. Houses are used for sporting events, assemblies and gatherings.

Carmel House is named after Our Lady of Mount Carmel, the title given to the Blessed Virgin Mary in her role as patroness of the Carmelite Order. The colour of Carmel House is red.

Fatima House is named after our Lady of Fatima, a Catholic title of the Blessed Virgin Mary, based on the famed appearances of Mary reported in 1917 at Cova da Iria in Fátima, Portugal. The colour of Fatima House is yellow.

Mercy House is named after the Sisters of Mercy, a religious institute of Catholic women founded in Dublin, Ireland, on December 1831 by Catherine McAuley. The colour of Mercy House is green.

St Joseph Primary School is named after St Joseph, the earthly father of Jesus and the husband of the Virgin Mary. First appearing in the gospels of Matthew and Luke, St Joseph's lineage is traced back to King David. According to the Bible, Joseph was born circa 100 B.C. A sculpture of St Joseph's image as a carpenter is a highlight of the school's courtyard.